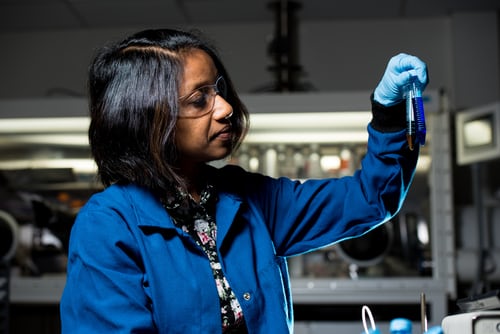 Lauren is an IRIS Alumna and an undergraduate currently studying experimental psychology at the University of Oxford.

11 February 2020 – When I was 17, my classmates and I investigated the physical and mental benefits of biodiversity.

This pioneering project involved us testing the blood pressure of students in every year group, before and after a 10-minute walk outside during the school day. It led to changes in the way our school used the outdoors for educational activities, including lessons.

It was exciting to find that students across the age groups do benefit from taking just a 10-minute walk in a natural environment.

But, more remarkably, we found that older students got the most from it: it helped to reduce their blood pressure and stress levels far more significantly than for younger students. We assumed that this was related to the pressure of exams. Oddly enough, those students who walked inside for 10 minutes became more stressed.

At the most fundamental level, the project taught me how human data collection works in practice – and sometimes how awkward it can be. Walking with 12-year-olds outside, trying to keep them calm and silent for 10 minutes, was often quite comic. I also learned that if someone is nervous their blood pressure can skyrocket, and this can throw the data completely off. These experiences have helped me no end at university.

I found that students who had conducted research and presented their projects had developed a variety of new skills – not just academic skills, but others that will be useful in later life, such as confidence, resilience, teamwork and problem solving.

The success of our work led to its being expanded to schools all over the country. This meant I got the unique opportunity to present our discoveries at the Authentic Biology symposium, at the Wellcome Trust.

This boosted my confidence and gave me experience of public speaking at a young age. It gave me a chance to prepare for questioning, too. One question, in particular, came up: how might our results differ if students walked in different environments, such as a museum? Perhaps that’s something to be pursued in the future.

All this was made possible by the Institute for Research in Schools. Without being over dramatic, working with IRIS changed the course of my future by showing me how much I can make a difference.

At 18, I was fortunate enough to co-author a paper – something that students usually first get the chance to do as a postgrad – about the experiences of secondary school students who presented their findings to the scientific community at national Iris conferences.

Even more incredibly, my approach to designing and writing it was recommended to other academics by the lead researcher.

I found that students who had conducted research and presented their projects had developed a variety of new skills – not just academic skills, but others that will be useful in later life, such as confidence, resilience, teamwork and problem solving.

The students also gained new connections and people to champion them. And, as an extra bonus, they felt like real scientists whose findings really were making a difference to the world around them.

I’m just so pleased that I got the chance to explore student-led research at an early age through Iris, because it became such a huge part of my application to university.

Last year, I was accepted on to the Lady Margaret Hall Foundation Year, a University of Oxford scheme that aims to increase access to top universities for students from underrepresented backgrounds: those with low incomes or who are the first in their families to go into higher education.

In the future, I hope to conduct psychological research as a career.

My experiences at school – working with professional scientists, leading on meaningful research and working on projects that had a real impact on the scientific community – have enormously shaped my goals.

Today is International Day of Women and Girls in Science, which celebrates the scientific achievements of women but also acknowledges that there is still much to be done to reduce stereotypes and to support women and girls in pursuing their goals.

I have seen that women and girls are capable of being leading figures and role models, using science to support their cause. A well-known example has been Greta Thunberg, who has had a huge impact on girls like me.

I know that carrying out the kind of research that I’ve done through Iris, especially relating to health, can help to improve students’ understanding of the challenges we are currently facing.

It can also inspire a sense of achievement and self-belief in girls, and potentially provide them with the confidence to become future leaders within their field.