Empowering young people with the skills to explore their own questions in particle physics.

With access to our support materials, students develop the knowledge and skills required to successfully complete research. Hosted securely on the Rutherford Appleton Laboratory server, the online resources provide training in using Python to access and manipulate the ATLAS data and ultimately to search for the Higgs Boson.

Student research: Using the skills acquired in Phase 2, students are provided with structured support to enable them to develop a research idea of their own using the ATLAS data. Who knows what discoveries lie hidden in the data?

Artefact development and conference: Students produce an article, academic poster presentation or academic paper, based on their research process and/or findings with the aim of exhibiting at IRIS’ conference. 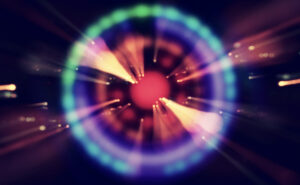 The ATLAS detector is used by physicists to observe the results of proton-proton collisions in the Large Hadron Collider at CERN in Geneva, the largest collider of its type in the world.

Big Data: ATLAS introduces to students the techniques used to analyse ATLAS data, giving them the chance to explore their own questions in particle physics.

Developed by IRIS, in conjunction with the University of Oxford and the Rutherford Appleton Laboratory, the project, while challenging, is designed to support students who may not have come across particle physics or computer programming before. It is also hugely impactful for students already knowledgeable about these subjects.

It’s an obvious statement that among the school pupils of today are the scientific leaders of the future. Their ideas and experiments will  change our understanding of the universe in ways that today we can’t even imagine.