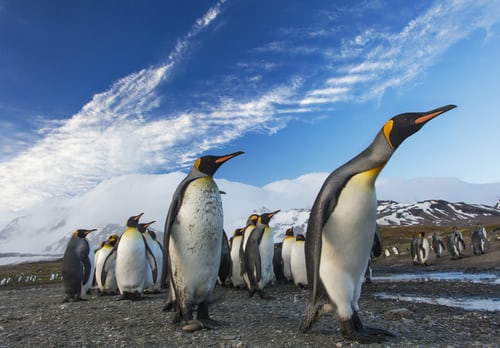 Scottish high school students were recently acknowledged for their encouragement which led to a discovery of a new colony of emperor penguins. The study, as part of the British Antarctic Survey, reveals that there are nearly 20% more emperor penguin colonies an Antarctica than previously thought.

Dr Peter Fretwell and Philip Trathan, the geographers and researchers for the British Antarctic Survey, uncovered the penguin colony using Sentinel-2. Young researchers from the Stirling High School used the same satellite mapping technology as part of an Institute for Research in Schools project called Earth Observation. Students were inspired by a programme by David Attenborough on the plight of penguins, which encouraged them to see if the colonies could be located using freely available satellite imagery and processing software.

In Peter and Philip’s co-authored research paper about the findings published in the Remote Sensing in Ecology and Conservation, they wrote:

“We would also like to acknowledge the impetus given to the project by Dr Andrew McDonald and the pupils of Stirling High School whose initial experiments with Sentinel-2 and penguins inspired PTF to use the higher resolution satellite to find emperor penguin colonies.”

“The pupils worked in their own time to develop and code an algorithm to identify penguin colonies from the satellite imagery. To be acknowledged in a peer reviewed paper was a great boost to the group and showed that it is possible to perform meaningful real science in schools.”

The study found a number of colonies located far offshore, situated on sea ice that has formed around icebergs that had grounded in shallow water. These colonies, up to 180 km offshore, are a surprising new finding in the behaviour of this increasingly well-known species.

Dr Phil Trathan, Head of Conservation Biology at BAS, has been studying penguins for the last three decades. He says:

“Whilst it’s good news that we’ve found these new colonies, the breeding sites are all in locations where recent model projections suggest emperors will decline. Birds in these sites are therefore probably the ‘canaries in the coalmine’ – we need to watch these sites carefully as climate change will affect this region.”