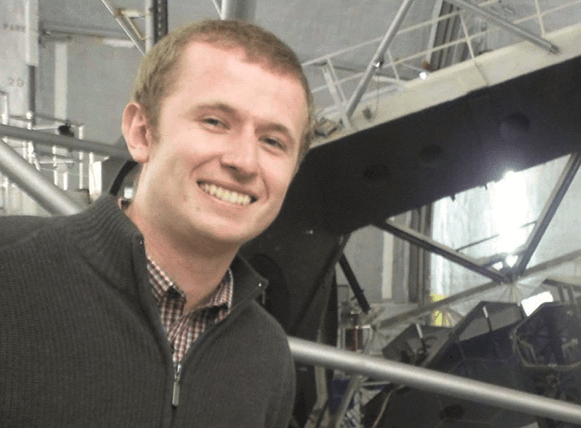 A gifted student, Peter completed 15 GCSEs, including Astronomy, Biology, Chemistry, Physics, Maths and Statistics. Now a researcher at the University of Oxford, Peter attended Simon Langton Grammar School for Boys in Canterbury. While he describes his learning experience as fantastic, he did not find the curriculum consistently challenging or stretching.

When it came to choosing A level subjects, Peter picked the ones he excelled in and enjoyed. He knew he’d probably study maths at university.  He received a healthy amount of encouragement and support from his parents and teachers to consider an Oxbridge education.

However, towards the end of Year 11, Peter took part in a wide range of STEM-based research projects in school that unlocked his passion for science and propelled him into a career of scientific research.

He led a team to design a cosmic ray detector in Years 12 and 13 as part of LUCID – an IRIS project supported by CERN. Peter and his peers worked with engineers from Surrey Satellite Technologies Limited, the world’s leading small satellite manufacturer, and Larry Pinsky, Professor and Chair of Physics at the University of Houston. Their work caught the interest of NASA and they presented at the Medipix Collaboration Meeting at CERN and exhibited the instrument at the Royal Society Summer Exhibition in London.

Peter was also awarded Young Scientist of the Year for a plasma physics research project he carried out with Imperial College. His findings were published in the journal High Energy Density Physics.

Through these experiences, Peter gained the skills and motivation to pursue a research career. In addition to learning advanced mathematics, he gained a talent for deciphering scientific papers and the skills for communicating and presenting research findings.

Peter currently holds a postdoctoral research position at the University of Oxford focusing on an area related to the plasma physics research he did at school. He says his research has been shared with a much wider audience, due to the relationships and partnerships he developed during his IRIS days.

He achieved undergraduate and masters degrees in Mathematics and Astrophysics at the University of Cambridge and a PhD at the University of Oxford. As part of his PhD study he used telescopes in Chile, Hawaii and South Africa to understand the evolution of galaxies over the history of the universe.

As academics and institutions opened the door to research for him, he continues to do the same for school aged students. He ran a project for 6th form students using data from two of the telescopes he used during his PhD. Peter was made a Fellow of the Royal Institution and the British Science Association in recognition of his support for student participation in STEM.